Raise your voice and get involved by joining a NoBombs4Syria.com protest against ANCA’s Endorsement of Rep. Adam Schiff. The protest will take place in front of Beverly Hilton Hotel, in Beverly Hills, on Sunday, November 2, 2014, at 4 p.m. This is where the ANCA Western Region is going to hold its Annual Banquet. Please join us.

Steve Stokes and Rep. Adam Schiff, who both are running for Congress in the 28th District, have been invited to discuss the Syrian conflict and the U.S. involvement live on the AMGA TV, on Thursday, October 30, 2014, at 7 p.m. Steve Stokes has already accepted the invitation, Adam Schiff’s response is still pending. Please tune in, so you can make an informed decision at the ballot box on November 4, 2014.

On October 23, 2014, the Armenian National Committee of America (ANCA) reaffirmed its endorsement of Adam Schiff, the incumbent House Representative. He is running in the California 28th District, where an estimated 23% of the registered voters are Armenian, and the ANCA claims it is entitled to ‘throw community’s electoral support behind U.S. House and Senate candidates with proven track records on Armenian American Issues.’ (see: http://www.anca.org/press_releases/press_releases.php?prid=2390).

Although the ANCA gives Adam Schiff an “A+” score for his ‘proven track record on Armenian American issues,’ it neglected to score his track record on issues regarding his support of the Syrian “moderate” opposition infested with al Qaeda and ISIS/ISIL, which have caused the death of hundreds of thousands of civilians, including Armenians in Syria.

For these reasons, we, the people of the 28th District, are asking for the immediate withdrawal of the ANCA’s endorsement of Adam Schiff. We strongly believe that it is not only wrong, but also unethical and immoral for the ANCA to ‘throw community’s electoral support’ behind a man who has put the lives of that very community’s brothers and sisters at stake in Syria by backing forces that have caused death, destruction of property and displacement of scores of civilians all over Syria.

For more information and to see fact sheet on Adam Schiff’s record on Syria and the Middle East visit: https://nobombs4syria.com/schiff-fact-sheet/

Please join us at Mainstage Theater/Auditorium of the Glendale Community College, on Friday, October 24, 2014 at 7 pm, for the event “Responding to the Humanitarian Crisis in Syria and Iraq.” Please visit the Facebook Event page to RSVP.

USAID has provided around $3 billion in humanitarian aid to its implementing partners in Syria with the aim of helping the Syrian people. A lot of that aid found its way into the hands of al Qaeda and ISISI/ISIL fighters. We will be discussing how Americans can help the civilians of Syria by guiding the U.S. government and congressional representatives to make wiser decisions about U.S. aid distribution so that it does not fall into the hands of terrorists who perpetuate the war and suffering in Syria, Iraq and the surrounding countries.

Please feel free to share the flyer with any other organizations or individuals you think might find this event beneficial and interesting. For more information, please see Fact Sheet About Rep. Adam Schiff: Crisis in Syria and Middle East

An evening with Theodosios of Sebastia (Atallah Hanna), the Archbishop of Sebastia from the Orthodox Patriarchate of Jerusalem, in Los Angeles, CA, on September 11, 2014. It was organized by the Arab Americans for Syria. The guest speakers were John Parker, West Coast Coordinator of the International Action Center, and Richard Becker from A.N.S.W.E.R. Coalition. The evening was in English and Arabic with consecutive English interpretation, and was followed by a Q&A session. (Watch another evening with Archbishop Attallah Hanna in Pasadena, CA, in Arabic without intepretation at https://nobombs4syria.com/arcb-attallah-hanna-la-arabic/)

An evening with Theodosios of Sebastia (Atallah Hanna), the Archbishop of Sebastia from the Orthodox Patriarchate of Jerusalem, at Hilton Hotel in Pasadena, on September 7, 2014. It was organized by the Arab Americans for Syria. Grand Mufti of Syria Dr. Ahmad Baderddin Hassoun delivered a live video address. The evening was in Arabic. (Watch another evening with Archbishop Attallah Hanna in Los Angeles, CA, with consecutive English interpretation at https://nobombs4syria.com/arcb-attallah-hanna-la-english/)

Mother Agnes-Mariam’s presentation about what really is going on Syria at the United Methodist Church Hall in Glendale, CA.

END_OF_DOCUMENT_TOKEN_TO_BE_REPLACED

Mother Agnes-Mariam’s presentation about the Syrian Issue at Dandana Restaurant in Glendora, CA. (The language is chiefly Arabic)
END_OF_DOCUMENT_TOKEN_TO_BE_REPLACED

Special appearance at St. Peter Armenian Church in Van Nuys, CA. Mother Agnes-Mariam was present during the Divine Liturgy. She shared her thoughts about the prospects for peace in Syria. Afterwards, there was a requiem service for the innocent victims of the war in Syria.
END_OF_DOCUMENT_TOKEN_TO_BE_REPLACED 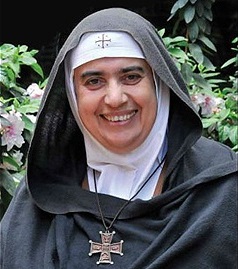 Mother Agnes Mariam of the Cross

Anti-War activists of Los Angeles in cooperation with the Arab-Americans for Syria invite you to hear Mother Agnes-Mariam of the Cross speak on What Really is Happening in Syria Today. Mark your calendars to attend three events featuring Mother Agnes, in the Greater Los Angeles area, on May 4, 2013. (See below) END_OF_DOCUMENT_TOKEN_TO_BE_REPLACED

The Truth Must Be Told

The Truth Must Be Told